Recently, a former gas station in a key location within the City of Alliance received a No Further Action (NFA) status from the Bureau of Underground Storage Tank Regulations (BUSTR). A NFA is the end-goal when performing BUSTR corrective actions. It means that chemicals of concern (COCs) are cleaned up to levels that are acceptable to the enforcing agencies and no more activities are needed to clean up the site. Ultimately, the site is now environmentally safe for the community it lies in.

The property was originally developed in the 1940’s as a gasoline and service station. Throughout the years, the station utilized a 1,821 square foot station building, five dispensers, and five steel underground storage tanks (USTs) for gasoline, kerosene, and used oil. In 1998, the fuel dispensers and USTs for gasoline and kerosene were removed. The used oil UST was closed in place in 2003 when the station building went vacant. Over the years, the abandoned building became an eyesore and environmental hazard in a significant area of the city.

In 2015, The University of Mount Union became interested in this site to incorporate it into the expanding campus. Shortly after this, the Abandoned Gas Station (AGS) Grant became available and the City of Alliance partnered with Raiders Penn LLC to obtain the AGS grant in June 2018 after assisting in obtaining a “Class C” status on a release for the site.

Over the next year, BJAAM performed the installation of several monitoring wells and soil borings on and adjacent to the site. Free product was identified in one monitoring well near the former dispenser island. After the completion of the Tier 1 Investigation, a second AGS grant was awarded in July 2019.

During September 2019, the site was excavated to remove soil contamination above BUSTR and/or Voluntary Action Program (VAP) action level, the former hydraulic lift posts and the previously closed-in-place waste oil UST. Approximately 4,000 tons of soil was disposed of at the appropriate disposal facility based on the COCs. Several monitoring wells, soil boring and hand augers were installed after the soil excavation to monitor ground water concentrations and to conduct a VAP site-specific COC background study. After the completion of the study, an additional 446 tons of soil was excavated and disposed of to remove the soil above VAP action levels.

BUSTR granted the NFA for the open BUSTR releases in October 2020. The University of Mount Union plans on incorporating the site into future campus expansion. Short term use includes student parking, but long term could possibly include the construction of an academic building for the growing programs or additional student housing.

Call Jason Grecco at (330) 854-5300 ext. 110 or
email at jgrecco@bjaam.com to learn how
your community can benefit from an
Abandoned Gas Station Clean-up Fund Grant! 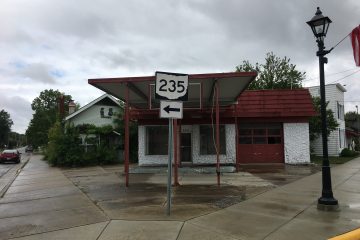 The Village of Lakeview Receives an Abandoned Gas Station Grant!